against extremism, for freedom of speech in cooperation with the pics4peaceYOUNGSTERS

At the spot where, in 1933, books which were branded “un-German” were burned by students, the Römerplatz in Frankfurt, Muthesius saws his GOLDEN FIELD, a 2-metre-square monochrome gold painting created especially for Frankfurt, into book-sized pieces and burns them. While he does this, young adults read texts which they have written in view of the challenges of our time, with perspectives on 1933 in mind.

The action takes place in cooperation with the City of Frankfurt and the multimedia, creative democracy initiative and registered association pics4peace. Together, the partners are taking a stand against extremism, for freedom of speech and democracy. The art action involving young people is sponsored by the Robert Bosch Stiftung.

Muthesius’s art action is heavy with symbolism. He carries the picture from the Römer to the square. The huge picture weighs over 40 kilograms. It is an effort to carry it. It alludes to the effort of the authors who wrote books or articles prior to 1933, with content that did not fit with the concept of the Nazis. Books like those that were burned on Römerplatz in 1933.

Muthesius then places the GOLDEN FIELD on a stand at the very spot where a bronze plaque embedded in the ground commemorates the book burning in the City of Frankfurt. The artist takes a broom and, almost as though it were a ritual, sweeps clean the area around the picture. 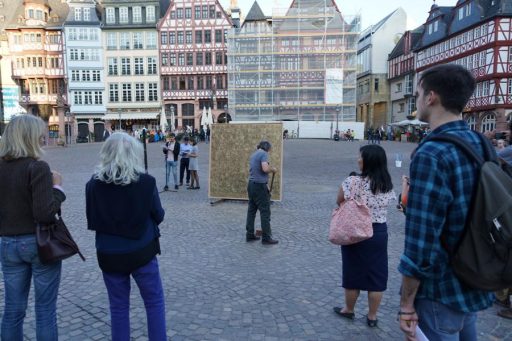 Meanwhile, young people read slowly and impressively:  “Crime scene: The library. Crime scene: The University. Crime scene: The Römer, 1933. Students storm city book shops, university libraries and more. Students. Students like us. The atmosphere is tense. The enthusiasm, great. The approach, radical. Brutal. ….” These are texts which they wrote with pics4peace for this occasion.

Now the artist unpacks his chainsaw and destroys the image of perfection. The screeching of the chainsaw evokes the noisy 15,000-strong crowd, many of them cheering, that had come to experience the book burning, as though to some sort of funfair. The speech by the evangelical student pastor ended with the crowd all cheering  “Heil” to the “German people” and to Adolf Hitler. 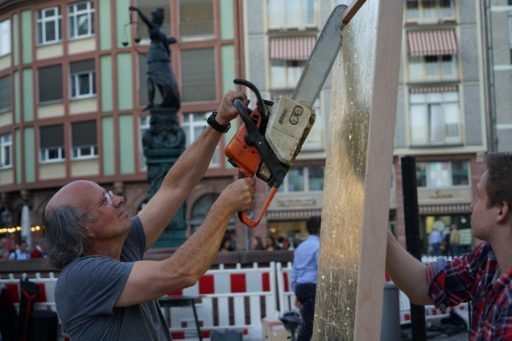 At the end, rectangular, book-sized pieces are left. The gold can still be seen on the pieces of wood. It is a symbol for the knowledge and truths that the authors had published in their works before they were burned.

Once again, the young people begin reciting their texts. This time, they are about the present day. Even today, knowledge and truth are destroyed, suppressed, manipulated. Book burning 4.0 has a new suit of clothes. And most of it is happening not on streets and squares, but primarily on the net.

Meanwhile, the artist piles the book-pieces on top of one another, in a bowl. As before, the pile is set on fire. Everyone watches as the glittering gold turns to ashes. The young voices both admonish and challenge. 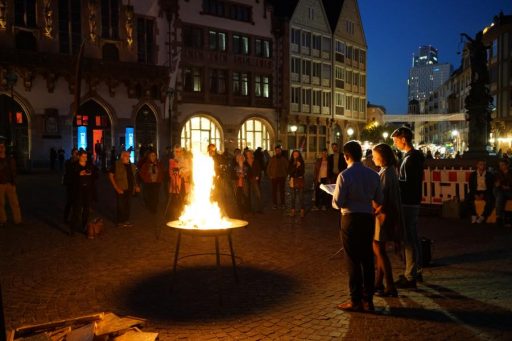 Watch the Hessenschau report, from 22:06