OUT AND ABOUT IN LA SERENISSIMA

Immersed in the magic of Venice’s history and art, among the tourists – with a camera and a skull

Winfried Muthesius sets off heavily laden, as always. This time he is crossing the Rio di Palazzo by boat, accompanied by two young Italians. When they arrive behind the Doge’s Palace, they heave the skull picture out of the boat and lean it up against a wall. Above the skull can be seen the Bridge of Sighs, which leads directly to the Venice prison. For the convicts, there was no more “serenissima” here – no trace of the “cheerfulness and serenity” of the city. The Ponte dei Sospiri led them straight to their dark and gloomy cells. At the bottom of the skull picture, the arcades opposite play with the light, casting their shadows onto the oil painting. They are adding their own sketch, drawn on the stone floor of the path along the Rio Canonica o Palazzo to the waterfront. 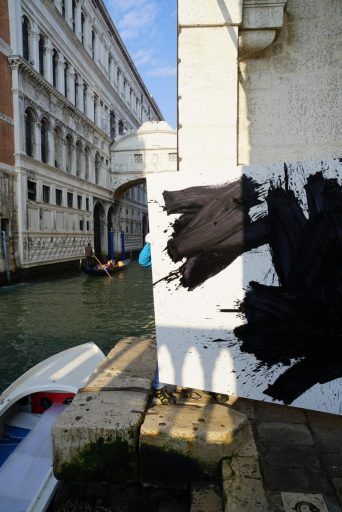 The men then carry the heavy, larger-than-life-size skull picture through the centre of the lagoon city. You would think that people would be surprised to see the strange group with the picture. 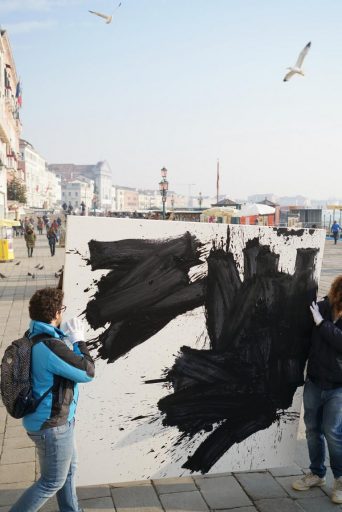 Yet among all the tourists strolling across the bridge or busily searching for the next hotspot, the abstract of the skull of a pogrom victim in black oil colour attracts little attention. 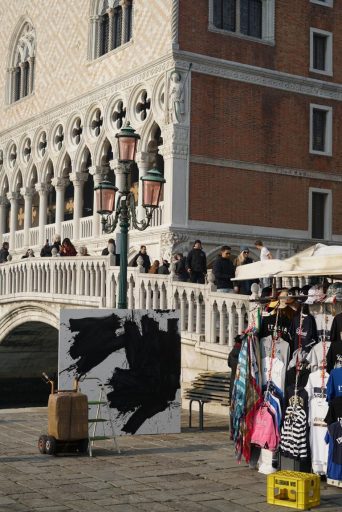 An old local couple walking hand in hand towards the artist seem uneasy, though. The wife briskly pulls her husband away from the unfolding spectacle.

The abstract black-and-white painting could not be more incongruous with the rich marble decorated facade of the cathedral, its ancient columns, sculptures and mosaics giving some idea of why this impressive building was the central state shrine of the Republic of Venice until the end of the 18th century. 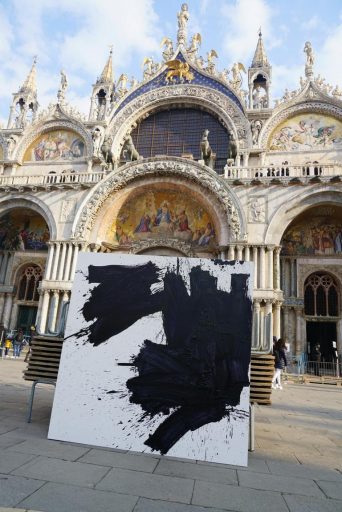 Winfried Muthesius has them both in his sights when he takes out his camera. He focuses from all angles, choosing close-ups as well as wide-angle shots, playing with light and shadow and with the passers-by hurrying past or stopping open-mouthed in front of the tourist attractions, so as to set up a real dialogue of contradictions.

The sun has just dropped below the horizon. The old lanterns are casting their long shadows. Muthesius begins to look for another site for his picture. 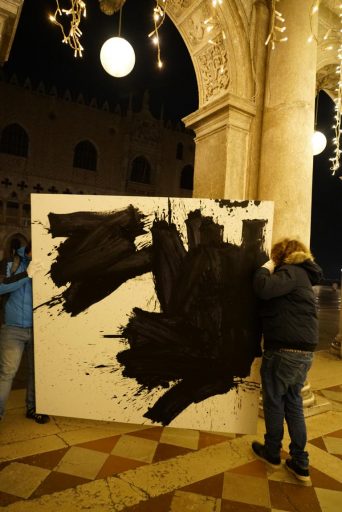 On the Piazza San Marco, which stretches almost 200 meters lengthwise and 80 meters across, framed by magnificent buildings, the skull rests starkly against the pillars of the arcades. Towering above it in the background is St. Mark’s Basilica, the Basilica San Marco. 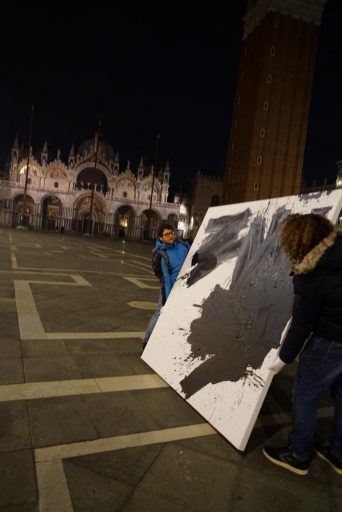 The photo series produced in Venice is only an intermediate stage in the process for Muthesius’s next work of art. Using the prints, he will devote himself to this city once more. Present-day challenges facing Venice and Italy create turmoil in the romantic magic of the city whose districts are connected by waterways, where no cars are allowed and where the streets are lined with splendid palazzi. That is what is captured when he processes the photographs, using powerful brush strokes to create new pittura oscura. Works of art that we can’t wait to see!